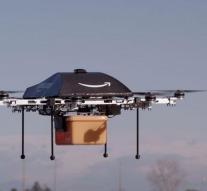 seattle - Amazon is already working on the delivery of packets of drones, but now goes a step further. The company has obtained a patent on a flying warehouse: a zeppelin where drones can collect their packets. That reports TechCrunch.

In the application for the patent Amazon explains how such a zeppelin will come in handy. As an example, the company calls a sporting event. The warehouse can be pre-stocked with merchandise and food for the fans. As a spectator order something, can bring the drone it within a few minutes from the airship to the fan.