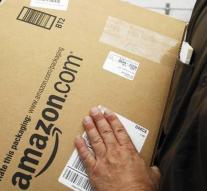 It is the first run to the bond market since 2014. The capital is primarily intended to finance the purchase of food wholesaler market Whole Foods worth $ 13.7 billion.

According to Bloomberg, the loans are divided into seven parts, with varying maturities, including a 40-year bond. Amazon owns a lot of cash, but receives a temporary loan from Bank of America and Goldman Sachs before the purchase.

In response to the loan, Moody's has given the group a 'positive' rating despite the growth of its debts at Amazon.