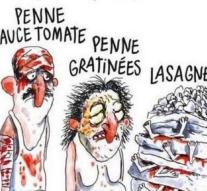 - "The Middle Italian town of Amatrice is a defamation complaint against Charlie Hebdo. The French satirical magazine recently published a cartoon in which victims of the recent earthquake were depicted as pasta dishes: a man with bloodied bandages as " penne in tomato sauce, '' a woman with a swollen face full of scratches as " penne gratin '' and a collapsed building where arms and legs protrude like lasagna " '."

"When Italians reacted angrily on, Charlie came up with a second cartoon, from one half under the rubble that says:,, Italians, it's not Charlie Hebdo who built your homes, it is the Mafia '!"

"Charlie Hebdo did not respond. In 2015, Islamist extremists killed twelve people in an attack on the editor of the magazine in Paris, in revenge for the publication of cartoons of the Prophet Mohammed."