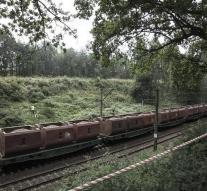 walbrzych - A Nazi train would be loaded with Jewish treasures and lost 'amber room' from a Russian palace. That hope to find two amateur historians excavations starting Tuesday in Poland.

According to the German Andreas Richter and Piotr Koper, a Pole, is the train in a tunnel system that the Germans at the end of World War II in Lower Silesia at the graves were near Waldenburg, now the Polish town of Walbrzych. The train would be a tunnel driven into his when the Soviets were advancing in 1945, after which he disappeared without a trace.

The 'Amber Room of the czar 'or amber room was a room at the Catherine Palace in St. Petersburg. In the palace, the walls of one room were lined with amber panels. The panels have disappeared during the war.


Although the two amateur historians are convinced that they are going to strike gold- they have even a claim for 10 percent of the loot deposited- there are major doubts. Experts in the field surveyed noted last year that probably 9 meter deep well is a tunnel, but the presence of a train during their soil investigation revealed nothing.

The coming week excavation should eliminate any ambiguity. The duo turned the help of 35 diggers. They expect after only two days to give more insight about the treasures that reveal the ground. Copper and Richter take it into account that they not only find the gold train of the Nazis, but also the remains of thousands of forced laborers.