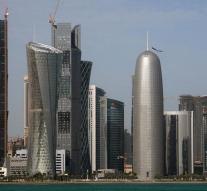 dubai/riyad - The government of the torn Yemen has broken the ties with Qatar following four Arab countries. Bahrain, Egypt, Saudi Arabia and the United Arab Emirates (UAE) earlier announced Monday that they cut down relations with Qatar.

Saudi Arabia has reported that Qatar is no longer part of the military coalition fighting in Yemen against rebels from the north of that country. The coalition sees in the Houthi rebels who control the capital of Sanaa, allies of Iran.

The five who disrupt relations with Qatar claim that Qatar supports terrorism and extremism. And especially Saudi Arabia, UAE and Bahrain are angry that Qatar has good ties with Shiite Iran. Saudi Arabia wants Iran to be a great power from the Middle East.