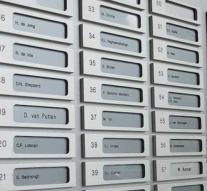 - The Flemish police have discovered a new trick that is probably used by thieves to check if residents are at home.

The burglars stick tape on the doorbell so that it keeps ringing. If no one opens, this means that they can strike their battle. The past few days there have been several reports with our southern neighbors about doorbells that were covered with black tape.

Earlier, the police in Zwolle warned against this trick.

'At first we thought about children who had mischief. But then they do belletrekrek and walk away. According to us, this was not the work of children, 'says the police against Het Nieuwsblad.

'The doorbell will ring through the tape. The resident then comes out to remove the tape. If the tape stays stuck and the bell continues to ring, it is a sign that the residents are not at home and burglars can make their mark. '

The police warns people not to remove the tape because of possible fingerprints. You can switch off the bell and inform the police.