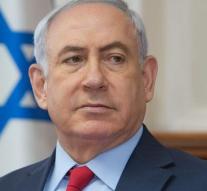 jerusalem - Israel follows the United States from UNESCO, the United Nations cultural and educational organization. Prime Minister Benjamin Netanyahu said Thursday that he had asked the Foreign Minister to cancel his membership. He called the American decision to do 'brave and ethical.'

Washington believes that the UN organization is in a process of thorough reform and still has an anti-Israeli touch. The Unesco accepted Palestine in 2011 as a full member.