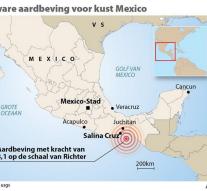 guatemala - The earthquake on the coast of Mexico is also felt in neighboring Guatemala. President Jimmy Morales said Friday for television that the damage is currently being mapped.

According to the authorities, the quake in Guatemala had a strength of 7. 7. For the Mexican coast in the Pacific, a force was measured of 8. 4. The earthquake took place for the coast of the state of Chiapas adjacent to Guatemala.

In Mexico, 50 million people have felt the earthquake. According to the president of Mexico, Enrique Peña Nieto, the earthquake has been the strongest in the region since 1932.

It is also unknown whether there are Dutch in the affected area. 'We are following the situation and investigating whether Dutch people are involved,' said a spokesman for the Ministry of Foreign Affairs.