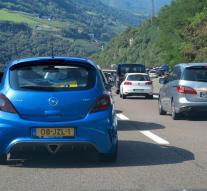 the hague - UPDATE 10.11 o'clock Black Saturday also had consequences in the Netherlands. It was also fast at Schiphol. On the A4's exits, traffic was wall-mounted for a while. It drives again, but it is still busy. The Traffic Information Service advises motorists to leave in good time.

Top pressures for holidaymakers on European roads, but also for ANWB employees. On the first black saturday of this year, they will also assist Dutch Dutch motorists. Our reporter Anna Mees is joining the ANWB today and reports live by twitter.

Travelers who travel by car should count on major delays on the European highways.

The first files originated very early, but in the course of the morning the pressure on the European roads increased sharply. In France there is the first 'black saturday' in a series of four. For millions of French, the holiday begins and many holidaymakers are back home.

Something after 09.00 hours, the VID counted 326 kilometers to the south. On the Autoroute du Soleil (A7) in France, traffic has a total of two hours delay. There are more than 80 kilometers of file. The expectation is that this will increase to about 100 kilometers. The files also run on the Fernpas and the Mont Blanctunnel. In Italy it is very busy towards Rimini Coast. For the Gotthard tunnel in Switzerland, waiting time has now been over two hours in a file of more than 14 kilometers.

Large events can lead to crowds in their own country. It is about the Summer Carnival in Rotterdam on Saturday, the Truckstar Festival on the Assen circuit on Saturday and Sunday and the two U2 concerts in the Amsterdam ArenA on Saturdays and Sundays.