Home / World / Also after 'Raqqa' US weapons to YPG 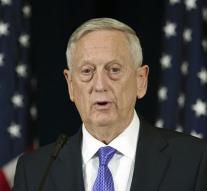 munich - The US Secretary of Defense Jim Mattis allows the United States to continue to provide the United States with the Kurdish YPG militia in Syria after the collapse of IS Raqqa, a robbery of weapons and equipment. According to NATO ally Turkey, who regards the YPG as a danger, Mattis has written in writing that the Americans retrieve the weapons when Islamic State is defeated.

The minister did not directly oppose this. 'We will do what we can,' he said to journalists who traveled with him to Germany. He pointed out that the YPG was well-armed before the US offered a more specialized material for the city war in Raqqa last month. He also said that the fight against IS after the intake of Raqqa will not be over.

Turkey sees the YPG as an extension of the Kurdish Labor Party PKK, which has been in armed struggle in the southeast of the country since the mid-1980s. Mattis talks to his Turkish ambassador Fikri Isik on Thursday in Brussels.