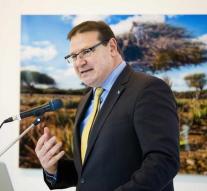 savaneta - Four veterans in Aruba will be awarded a war war of the Second World War. Three of them get a war memorial cross. This is special because that cross will no longer be published after 1968, except if there is already a request.

The applications actually originated before 1968 and were discovered by a sergeant-major by coincidence. The four Antillian men, who are all far above the nineties, were members of the Antillean shooting. They are honored by the entire crew of local Marines cheers on Aruba with a medal parade on Friday.

Three men get a war memorial cross and one gets the mobilization cross. They receive the medal in the presence of Governor Juan Alfonso Boekhoudt a day before the National Veterans Day. Aruba and the rest of the Netherlands Antilles were not occupied during the war.