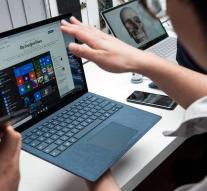 utrecht - In the first half of this year, at least eight hundred people became the scam of scams through the so-called Microsoft scam. By 2016, there were 1100, police say Thursday that warns of the scams.

From abroad, an English-speaking 'Microsoft employee' calls for so-called computer problems. 'There are problems with your computer. We would like to solve that for you. 'It's the start of a scam that has already cost a lot of people money.

A common method is to allow victims to install software. With this the scammer takes over the computer to remedy the problems. For the work, the scammers ask for a lot of money, for example in the form of iTunes credit cards. Sometimes the scammers get access to internet banking. The police advises people who are called by a Microsoft employee immediately.

On Wednesday, the National Security Center presented the Cybersecurity image of the Netherlands (CSBN 2017). One of the findings in this is that the resilience of the Dutch is lagging behind in the growing threat. The Microsoft scam is an example of that.