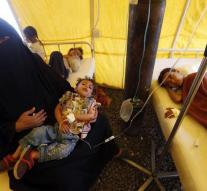 geneva - Yemen currently has 101,820 choler patients. The outbreak of the disease in the country affected by civil war began on April 27th. The United Nations World Health Organization (WHO) announced Thursday that 789 people have died of the disease.

Cholera is an infectious disease caused by a bacterium. The symptoms are diarrhea and dehydration. Polluted water is the main cause of the disease. Cholera is good to fight if the disease is recognized in good time.

The people of Yemen do not only struggle with this condition. There is a serious lack of food, which currently affects more than seven million people. According to an estimate in 2016, about 27 million people live in the country.