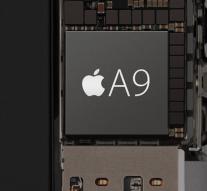 - As with any new iPhone model was also around the iPhone 6s and 6s Plus even a little scandal. Apple namely the processor has two suppliers: Samsung and TSMC. On the internet quickly arose the story that the chip of Samsung would consume more power, but is lagging enormously. Reported least Consumer Reports, the American counterpart of the Consumer.

When it became known that two different chips are used, attracted fans to immediately set out to see if there is a difference between the two. For this purpose, among others, used the app Geekbench, which the phone at full speed operated to determine, among other things as how powerful the device. This test showed that the chip from TSMC consumed less power and the phone is up to two hours left outlast the processor from Samsung.

Apple was already quick to say that the use of Geekbench is not representative of normal, everyday use. In practice, there is only a difference of one to two per cent are between the chips. That agrees now Consumer Reports, which conducted independent tests. This revolved around playing video and reloading of Web sites, which more approximates normal use.