Home / Tech / 'Almost half the elderly fear of dating fraud ' 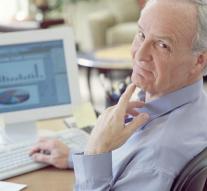 amsterdam - Four in ten older people are afraid, blinded by love, falling into the traps of dating fraudsters. They would 'maybe' be victim of scammers love, they say in a survey conducted on behalf of the Fraud Helpdesk.

More than seven percent of the surveyed people over 50 has actually had to deal with dating fraud is evident from the same study. Most have lost a few hundred euros to scam artists, but there are also victims among which 20 000 have become poorer.

Scammers on Facebook and dating sites make good use of the vulnerability of people who are looking for a relationship, and thus bring enormous financial and emotional damage. The people who happen to be naive, says 48 percent of respondents. One in three said the fraud victims not to blame.

Half of those surveyed want dating sites introduce stricter identity checks, so no chance scammers get more.