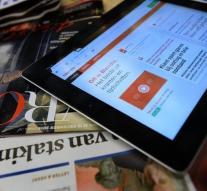 amsterdam - The Android app from the Blendle online store has been downloaded 100,000 times in the Google Play Store. That made founder Alexander Klöpping know Wednesday. The Android app was released last March. According to Klöpping, the similar iOS app has been downloaded at least 90,000 times. 'So let's say that we are at almost four Johan Cruijff Arena's.' This morning, a confetti gun went to the office, 'says the internet entrepreneur.

Via Blendle, people can read articles from newspapers and magazines for payment of a small amount per item. Earlier this year, Blendle launched a subscription model, allowing users to access a personalized news offer for a fixed amount of 9.99 euros a month.

Klöpping maintains the subscription model numbers for itself. 'Because we are still adding a lot of functionalities, but it's up to expectations', says the Blendle founder. 'The purpose of the subscription to Blendle is that we want to compete with all Instragrams, Facebooks and Spotify's on the homescreens of all those people, and then such an app will just work well. The goal remains to reach a generation of people who would never have subscribed to a newspaper. '