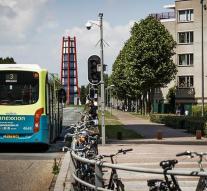 almere - Police have arrested two men in Almere suspected of vandalizing service buses of transport company Connexxion. The carrier will be for some time been plagued by a series of vandalism in that place. In particular panes of passenger buses have been vandalized.

The men of eighteen and 24 years old were arrested Friday. The first destroyed on May 24 the window of a service van. The Almere resident did so because he was expelled just before the bus by the transport company employees with a fine for fare evasion. The second man, 24-year-old Almere resident, threw a stone on May 16 against the side of a similar van. Company employees had caught him shortly before, when he was trying to put bikes on the bus lane.

Connexxion to recent weeks in Almere on the conveyor belt with vandalism. In Kruidenwijk buses were pelted with stones. The company stopped the bus earlier, shortly after a number of such incidents in a row. Last week, drivers Connexxion put a few hours work down after an angry customer smashed a window of a bus. thereby a passenger got glass in an eye.


The municipality recently took measures in an attempt to halt demolitions. Thus loose stones along the routes removed and introduced additional camera and police surveillance.