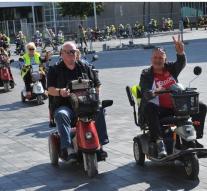 Keurig in a row, accompanied by volunteers, first aid staff and a service engineer. Everywhere was thought of during the scooter tour in Almere, where organizer Rob Krol (53) wants to address a bigger social issue: loneliness. 'Some elderly people are just lonely. Today we are going to hang out, instead of hanging behind the geraniums. '

Of the 4.1 million 55-plus people, one million people feel lonely. The older people become, the more lonely they feel- on average. Half of the people between the ages of 75 and 85 feel lonely. Ten percent feel 'extremely lonely' and only social contacts once a month.

Part of the scooter tour is a visit to Almere Jungle, and a joint singing accompanied by an accordion. 'You hear it in the background,' says Krol by phone. 'It's old Dutch music. Whether they're going to sing along, I do not know, but it's cozy. '

Krol, himself in a scooter, spent two months flying, inviting invitations and giving interviews to local TV. He is not sorry, because there is now a second trip on schedule. 'Whether there are new loves? I do not know. But everyone is having a chat. '