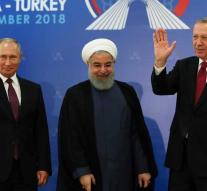 teheran - The leaders of Turkey, Russia and Iran meet in Tehran about Syria. The approach to the situation in Idlib is probably high on the agenda. Turkish President Erdogan expressed the fear that millions of civilians would move towards the Turkish border in an attack on the rebel stronghold. He called for an armistice in the area.

The Syrian province of Idlib is considered to be the last large enclave still in the hands of insurgents who actively fight against the Assad regime. It mainly concerns jihadist groups. However, there are also millions of citizens in the area, bordering on Turkey. That country currently catches some 3.5 million displaced Syrians and fears a new refugee flow.

Russia and Iran have other interests. These two countries are important pillars of the Syrian leader Bashar al-Assad.