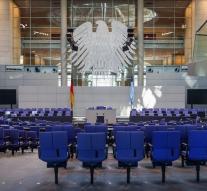 brussels - Any lobbyist who comes plead his case in Brussels at the European institutions, must register mandatory. Commissioner Frans Timmermans today unveiled plans for strengthening and expansion of the so-called transparency register.

That put sources in Brussels. The idea is that EU citizens who gain more insight in any way trying to influence the European legislative process. When the present Commission led by Jean-Claude Juncker took office in late 2014, the rules for the Commission have already been tightened. Under the adjustment is now being proposed includes the European Parliament and the European Council. Together with the Commission are the three institutions that make up the service in Brussels.

Lobbyists will have to register if not then they can make an appointment with a Commissioner, parliamentarian or senior official. Since 2011 exists a lobby register of the European Parliament, but this still does not work properly. Hence Timmermans now comes with a tightening and wants to expand the scope so that anyone who wants to discuss matters in Brussels to still can work around the new rules.

The proposal comes at a piquant moment. The Commission has been very embarrassed by integrity issues surrounding former Commission President Jose Manuel Barroso and former European Commissioner Neelie Kroes. In particular, the case of Barroso is salient in this case. The former prime minister of Portugal went after a mandatory cooling-off period of eighteen months to work at Goldman Sachs. The US bank is in Brussels synonymous with everything that went wrong during the euro crisis and the transition Barroso is therefore taken very ill.

Earlier this week revealed that President Barroso during his term as Commission President had many meetings with representatives of Goldman Sachs. But a mandatory register to report such encounters was no question, so these facts remained under the radar for years.

Juncker has already opened an investigation into the conduct of Mr Barroso. Possibly the Portuguese stripped of his pension. The privileges he had as former Commission President have already been deleted. When he announced in Brussels he should like to notify everyone else in the lobby register. That is explained by insiders as a sharp slap on the wrist, for just his informal Brussels network is relevant to Goldman Sachs.

tougher penalties are also linked to the extension of the transparency register. Those who can not abide by the rules will be banned from certain meetings with EU officials or even completely tilted off from the system, which he or she actually is persona non grata in Brussels.