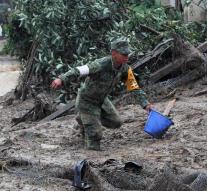 - The death toll from the storm that hit the east coast of Mexico, has risen to 38. The storm on Saturday (local time) caused landslides caused by heavy rainfall.

Because of the storm, collapsed houses. 28 people from the state of Puebla were slain, they lived near the town of Huauchinango in the mountains. In this area, the devastation the worst. Ten other deaths were from the state of Veracruz, said the national head of the emergency service. The death toll may rise.

The water level in the rivers is very high, the government worries.


The west coast of Mexico Sunday was still processing another storm. Javier reached wind speeds of 75 kilometers per hour. The storm draws toward Baja California, a large peninsula on the west coast of North America.