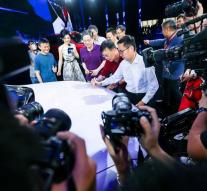 hangzhou - Chinese Internet company Alibaba has stepped into the car dealership. In collaboration with China's largest automaker SAIC developed the Roewe RX5, an SUV that is connected to the Internet via Alibaba's Yunos operating system, TechCrunch reports.

Alibaba provides some examples of what that might mean in practice. The user can put his or her preferred destinations and playlist in the car's computer system using a smartphone or wearable. Also can be paid through Alibababa's Alipay for parking, fuel or a coffee.

The RX5 contains three LED screens and space for up to four removable 360 ​​gaden cameras to create videos and photographs, so-called in-car selfies. The intelligent navigation system would work according to the creators without the use of GPS and WiFi.


The car is already in China to order on the e-commerce giant's website, for a price of more than 20 thousand euros.