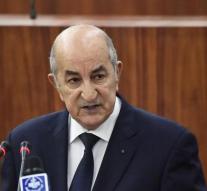 algiers - Algerian Prime Minister Abdelmadjid Tebboune has been dismissed in less than three months. President Abdelaziz Bouteflika will be Ahmed Ouyahia on Tuesday as a replacement. This 65-year-old politician has held office a number of times earlier, last in the period 2008-2012.

An official reason for Tebboune's forced farewell was not given. He would have had trouble with an influential businessman, who is considered to be the closest confederate of the head of state.