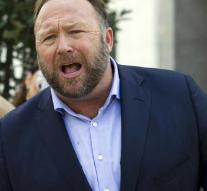 san francisco - Alex Jones, the man behind the infamous conspiracy site InfoWars, is no longer welcome at the Twitter message site and Periscope streaming service. The internet company reports that the Jones and Infowars accounts are permanently suspended. This decision is related to violations of the code of conduct.

Twitter put a temporary suspension on Jones and Infowars last month. Twitter CEO Jack Dorsey said earlier that he would not just want to ban Jones from the messaging service. He stated at the time that journalists must show that Jones's statements are not correct.