Home / World / Aleppo truce seems to be over 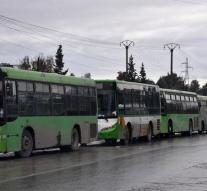 aleppo - The ceasefire in Syria Aleppo seems over. The Syrian Observatory for Human Rights reported Wednesday fierce fighting between the rebels and the government army.

'The fighting is fierce and the bombing heavily, it seems that everything is finished,' said the head of the observatory.

The buses were ready to evacuate residents of the besieged eastern Aleppo, left without passengers. This indicates that the agreement on evacuation of civilians and rebels falter. Iran, one of the allies of the Syrian Assad government, would have allowed the evacuation new requirements.