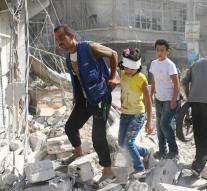 aleppo - Certainly 145 people have died in two days by air attacks carried out in eastern Aleppo. This part of the Syrian city is still in the hands of the rebels. So long as that is the case, the air force President Assad bombarded with support from the Russians goals.

After a relative lull of several days to resume warplanes Tuesday their missions. In Damascus, the quiet days were previously interpreted as an opportunity for the civilian population to leave the city.

Aleppo is now being challenged for years in the bloody civil war. The largest city of Syria had at the outbreak of these 2.5 million people. It is unknown how many people still live.