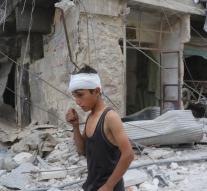 - Bombing the east of the Syrian city of Aleppo on Wednesday claimed at least 21 lives. Among the victims were five children, the Syrian Observatory for Human Rights said. Also, people in the city reported that the heavy airstrikes that began Tuesday proceed continuously after a period of relative calm.

' We were woken up with bombardments and warplanes and helicopters are still working, '' said a nurse from eastern Aleppo. The Russian government announced still observe a break and not to carry out bombings in the city. Syrian state television reported Tuesday that the Syrian Air Force ' terrorist strongholds '' was attacked in the east of Aleppo.

According to the Observatory, trying to follow the war from the UK through a network of informants, is the death toll in Aleppo from the last two days at least 32. One of the bombing was near a children's hospital. Whether the hospital is also concerned themselves is unclear.