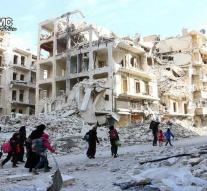 - An artillery bombardment took Wednesday according to rescuers least 45 people living on the east side of the Syrian city of Aleppo. Dozens of others were injured by the attack on the part of the city where rebels still shots. While the battle for the city continues, more and more residents to flee the eastern part.

The Syrian Observatory for Human Rights, the civil war from England follows through observers on the ground, says that the past few days more than 50 000 people have been displaced by the fighting. According to previous estimates, lived in eastern Aleppo still about 250 000 people.