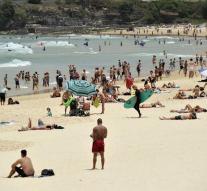 randwick - The City Council of Randwick, a suburb of the largest Australian city of Sydney, says an alcohol ban on the popular Sydney Coogee Beach. Australian media reported on Tuesday that the council has come to this decision after a big party on the beach during Christmas caused havoc.

Thousands of drunken revelers came together Sunday at Coogee Beach. They pulled a trail of destruction, leaving no less than fifteen tons of trash.

The ban on alcohol is Thursday and will remain until the end of the Australian summer, in late April. Mayor of Randwick Noel D'Souza told ABC News that there is no other option than the alcohol ban. 'The public outcry for the destruction of the parks and the beach itself is huge,' said the mayor.

An eyewitness said the recreation area is unprecedented destroyed. 'It was a complete destruction of the grass. Thrown bottles and even complete picnic rug packages to cups were left behind. Pushy people in crowded buses were seized in their backpacks by the police. Bus drivers the doors could not possibly get close. '