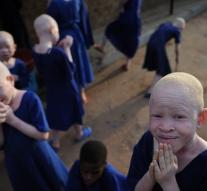 geneve - The growing number of attacks on albinos in Africa , as are held in different countries on the continent soon elections.

Candidates for election to have body parts of the depigmented people to use in rituals of black magic. That said, a human rights expert from the United Nations Thursday. From six different countries in Southern and East Africa reported attacks on albinos. In South Africa, was found a young albino woman was missing various body parts and skin. A 56-year-old Kenyan with albinism came after various body parts during an attack were cut off. " Albinos are among the most vulnerable people in the region ", said Ikponwosa Ero, the UN expert in the field of albinism. " Their worries are heightened by a constant fear of attacks by now people, including family members, who find their body parts more valuable than their lives. " Black magicians pay up to 66.000 euros for a complete 'set' body parts.

They use magic formulas that happiness, love and prosperity should produce. Tanzania, where albinos are attacked regularly, hold elections in the coming months. That includes Mozambique and the Central African Republic. Since 2000, in Tanzania for 75 albinos, including children, were killed.

Most were hacked to death. Some believe that the body parts are more powerful if the victim during the amputation yelled.