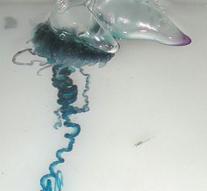 - Beach walkers and sunbathers have to watch the next few days in the far southwest of England during the paddling. In Cornwall and the Isles of Scilly is alarm beaten because of the stranding of a marine animal known as' Portuguese warship (Physalia physalis). There are found several copies.

This on a large jellyfish-like polyp colonies with long tentacles are dangerous to touch. A 'sting' is not only painful but potentially life threatening in case of an allergic reaction. ' It feels a bit like an electric shock and can cause skin red welts. It can be fatal, especially if you end up between the tentacles and is often crossed, '' said marine biologist Peter Richardson Thursday in The Guardian.

Deadly incidents are not known to him in Britain. Portuguese warship live in much warmer regions of the ocean, but drives from time to time to northern latitudes. The last time the English beaches were achieved in 2012 was the species is sporadically spotted in the North Sea.