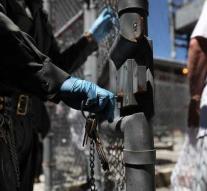 montgomery - The execution of an American prisoner failed last week because medical staff failed to find a suitable vein to administer the lethal dose. After two and a half hours, according to American media, the man had at least twelve injection wounds, but he was still alive.

The 61-year-old Doyle Hamm has been on death row for more than half of his life. 'It was a bloody, wasted execution that can only be described as torture,' Professor Bernard Harcourt of the University of Columbia, representing Hamm, reported. Two pairs of nurses tried in vain to find a vein in Ham's crotch, his knees and his feet.

According to Harcourt, the nurses probably also got the bladder of the sentenced person, because the next day blood was in his urine. Hamm has cancer and has had many infusions, causing his veins to be affected.

It is unclear whether Alabama will plan a new execution date. The state is one of the 31 American states where the death penalty is still being executed.