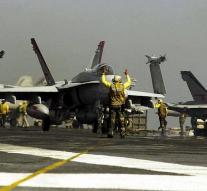 - One of the leaders of al Qaeda in Afghanistan, Farouk al-Qahtani, was slain last month in a US airstrike. This was reported by the US Department of Defense Friday (local time).

Al-Qahtani has held the leadership of the terrorist group in the northeast of the country. He had the responsibility to establish safe havens for al-Qaeda. On 23 October he was slain in Kunar.

The Pentagon is still busy examining the result of another air strike on the same day. Which was directed against Bilal al-Utabi, another leader of al Qaeda in Afghanistan.