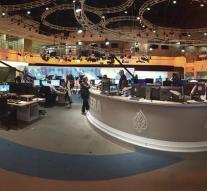 doha - The Qatar-funded news agency Al-Jazeera will not stop its work. That has let Al-Jazeera know Friday in response to the demand of some Arab countries that are in conflict with Qatar.

The demand is no more than an attempt to suppress freedom of expression in the Gulf region, so-called al-Jazeera shared in Qatar's capital Doha on Friday. Giles Trendle, head of the English-speaking section of the channel, called on all governments to respect the freedom of expression.

Closure of al-Jazeera was one of the demands that Saudi Arabia, the United Arab Emirates, Egypt and Bahrain had set before Friday in their diplomatic conflict with Qatar. The treacherous oil state destabilizes the region according to the four countries. It would also maintain ties with terrorist organizations.