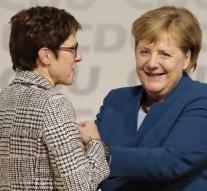 hamburg - With Annegret Kramp-Karrenbauer (56), German Chancellor Angela Merkel gets her dream successor as party leader of the CDU. AKK, as she is called, was persuaded by Merkel earlier this year to become national secretary-general.

AKK joined the CDU at the age of 18 and discovered its drive for politics. For that she wanted to become a midwife or a teacher. She studied law and political science.