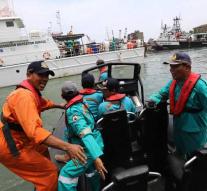 jakarta - The Indonesian plane from Lion Air, which collapsed from Java airport in the Java Sea shortly after takeoff, had a technical problem on a previous flight. According to the director of the airline company, the defect of the Boeing type 737 MAX 8 was corrected according to the correct procedures.

'The plane flew from Denpasar in Bali to Soekarno-Hatta airport in Jakarta. A report has been made about a technical issue and it has been resolved according to the procedures ', Edward Sirait told reporters, without going into the nature of the defect.