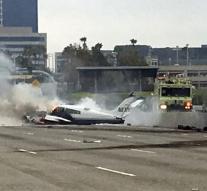 los angeles - A small plane crashed on a motorway in Orange County, California on Friday. Passers-byers picked up the two occupants from the burning wreckage. They were injured but not in danger of life. Among road users, nobody hurt anyone, reporting American media.

The pilot of the Cessna 310 reported shortly before the accident that one of the two engines had fallen out. He tried to return to John Wayne Airport, but did not catch the runway. The highway remains closed in the southern direction until the plane wreck has been investigated and removed.