Home / World / Airline boys get together 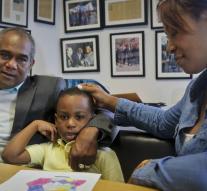 - Each airline ever lost a piece of luggage, but that a five year old boy is flown to the wrong city is serious gentleman, says his mother. That's why she goes to court.

Mother Maribel Martinez got the fright of her life when last August not her son Andy, but an unknown child getting along with flight crew or JFK airport in New York.

Apparently, inattentive staff Andy had accidentally switched with another little boy and put him on a flight to Boston. The little boy had to go to Boston joined Maribel up in New York. He even had Andy's passport with him. Both boys had departed from the Dominican Republic.

Only after three hours, JetBlue had figured out what went wrong and Maribel could speak to her son by phone. Until then, the mother thought her son had been kidnapped and that she would never see him again, the New York Daily News.

The woman wants compensation from the airline. How high that should be is not yet known. JetBlue declined to comment on the case.