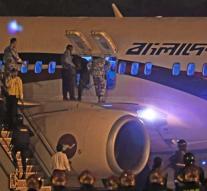 chittagong - A man from Bangladesh who wanted to hijack a plane on Sunday had a toy gun with him. That is what the police report in Bangladesh. He did not have real weapons or explosives.

'The man had mental problems,' says a spokesman for the police. 'We have heard that he had problems with his wife and that he wanted to speak to the Prime Minister. But we wait for further research until we draw conclusions. '