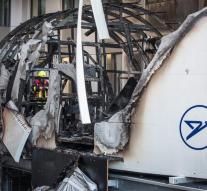 frankfurt - A relatively small fire at Frankfurt airport on Thursday caused a huge loss. A flight simulator airline Condor went up in flames. Cost: about 16 million.

The fire probably broke out due to a technical fault in the simulator, which looked like the top of a real cockpit of a passenger compartment behind it. Various media including the Rheinische Post put photos of the burned wreck.

A person who has had inhaled smoke to the hospital. About two hundred people had to leave the building when the flames engulfed the simulator.