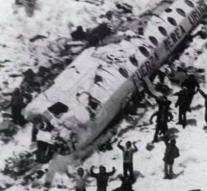 montevideo - A plane with two people aboard crashed on Monday in Uruguay during the commemoration of an airplane in the Andes in 1972. The passenger did not survive the crash.

The plane collapsed at an annual commemoration on the beach near Montevideo, the BBC reported.

In 1972 a plane with a Uruguayan rugby team collapsed in the Andes. The survivors had to eat some of the dead to survive.