Home / World / Aircraft approach each other to 1.5 meters 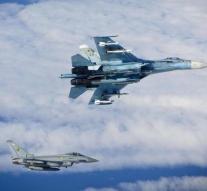 washington/moscow - An American exploratory plane and a Russian fighter plane have crossed each other. The life-threatening incident occurred over the Baltic Sea, where only two and a half meters separated the two devices.

The Russian Ministry of Defense confirmed the incident on Tuesday. It blamed the American pilot. The captain of the American fighter would have behaved 'provocatively' by sending his device towards the Russian aircraft. After this incident, Moscow said, a second American explorer took ten minutes later. It was intercepted and led away.

Washington thinks very differently about the incident: the pilot of the reconnaissance aircraft did not take any action that caused danger.