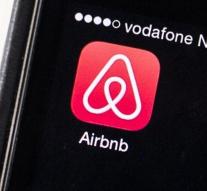 amsterdam - The council wants to hire Airbnb will transfer more data from people who do not follow the rules. But several experts warn that the company is not allowed to simply share this sensitive information with the government, for the sake of privacy.

The warning comes at the time the capital and the US company are about to conclude a new agreement to better regulate the rental housing by almost 14 000 from Amsterdam. Currently negotiating the city and Airbnb about a new pact to regulate the rental. Although Airbnb often mentions that it is working so well with no government in the world like Amsterdam, the two sides clash properly about how Airbnb deal with landlords who do not abide by the rules. Buyers or private tenants may offer their property on Airbnb, provided that no more than 60 days per year and up to four guests per night. But who exceed these limits is not removed by Airbnb, only illegal hotels that are caught by the municipality has Airbnb following a special request away.

The easiest solution would be if all of Airbnb rental companies in the offense and automatically removes the data from these people immediately played to the congregation. Several parties in the city council declared the city whatsoever to arrange this in the new pact. ' Openness', the Labour Party demanded, among other things. But privacy expert Gerrit-Jan Zwenne, professor at Leiden University, warns that the Church is about to break the law. ' The request for information to a market is bound with various national and international rules. If the US Yahoo's security 500 million emails bleeds we find that all very much, but the proposal to oblige Airbnb data to give the church there is a bit, '' said Zwenne. ' Citizens have the right to be unobserved. A tenant does not provide information on Airbnb to then see arrive at the church. ''

Also privacy watchdog Bits of Freedom is concerned about the pressure on Airbnb. ' In itself we find cooperation between government and business fine, '' said Daphne van der Kroft of the foundation. ' But the difference is between a demand to Airbnb data in a targeted suspicion, or to request a large amount of data from tenants without specific suspicion. The latter is out of the question. ''

Airbnb has announced that the municipality of Amsterdam highlights the international laws and regulations that protect the privacy of users. Previously, the company did promise that it wants to share anonymous data with the city, that the popularity of the platform is more manageable.