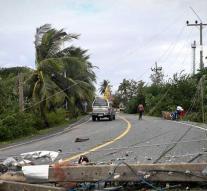 bangkok - A day after the tropical storm Pabuk, air traffic to the southern provinces in Thailand has resumed. All flights to and from Ko Samui were canceled on Friday as a precaution. Bangkok…

Most ferries to the southern islands in Thailand are also in operation again. These had stopped sailing before Friday, so that many holidaymakers were still stuck on the islands.

The storm weakened Friday afternoon and was scaled down to a severe depression. The weather services still warn for heavy rainfall and possible flooding in nine provinces. The authorities have reported one death. A fisherman capsized with his boat and died.