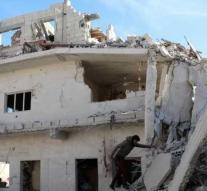 amman - For the first time in eight months, Syrian fighter planes have carried out air strikes in the southern province of Deraa. The attacks were just east of the provincial capital Deraa and other attacks about 60 kilometers and southwest of Damascus.

The government army dominates the northern part of the city of Deraa and a broad strip of land that connects the city with Syria, also controlled by the regime of President Assad. Deraa was previously declared a 'de-escalation zone' where the warring parties would be reluctant.

In February government troops began to recapture an enclave of jihadists east of Damascus, East Ghouta. A spokesperson for fighters who call themselves a Free Syrian Army said that the air strikes in the south might be a warning to the rebels, not to interfere with the battle for East Ghouta.