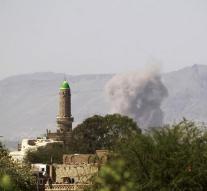 sanaa - As the sun rose fighters have a by Saudi Arabia backed coalition Sunday attacks on military Houthi targets in the Yemeni capital Sanaa. That happened a few hours after the three-day cease-fire officially ended.

The truce was declared Thursday for 72 hours for reinforcements to enable them to reach the capital to provide humanitarian aid. But Saturday there were again heavy fighting between the alliance led by Saudi Arabia and the Iranian-backed Houthis. Attempts by the United Nations to ensure that the weapons were actually deposited during the cease-fire were to no avail.

Sunday's UN envoy Ismail Ould Ahmed Cheickh talk with Houthi representatives in Sanaa to reach a solution. The civil war in Yemen has cost about 10 000 lives.