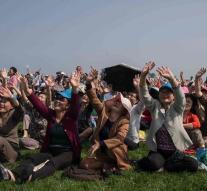 wonsan - An unusual scene in North Korea. The closed communist country under the leadership of Kim Jong Un organized Saturday a spectacular air show in the coastal city of Wonsan. It was an attempt to put on the card tourism in the region. The dilapidated airport of the region has been recently refurbished for commercial use.

The area around Wonsan, with beautiful beaches and an attractive mountain area, has been popular with Chinese tourists. Now, should also be drawn from other parts of world travelers. A British travel company says the authorities after years of lobbying so far have gotten to participate in an air show, yet a model of Western entertainment.

At the air show spectators could catch a glimpse of military helicopters and MiG fighters. Thousands of Koreans were allowed to cheer the aircraft. There were also many foreign journalists invited. The beer flowed, writes Associated Press.

North Korea has long tried to put tourism on the map, but it is always beaten back by international sanctions and political tensions around the nuclear program of the country.

Recently came North Korea in the news with what probably was a nuclear test. Although there was doubted by experts internationally, said the communist country a successful underground test of a hydrogen bomb.

In January, the United Nations did not know that it's time to prosecute the leaders of North Korea. According to the UN, there is still no improvement is seen in the human rights situation.\n  \n  \n   advertisement