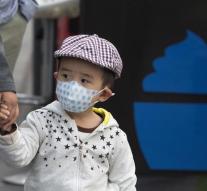 Two billion children live in extremely polluted areas. It is about 620 million children in South Asia, followed by 520 million in Africa and 450 children in the region around the Pacific Ocean. According to the report, there is also talk of indoor air pollution. Rural families with low incomes to use wood and coal to keep warm or to cook.

Almost all countries (92 percent) of the world do not meet the guidelines for air quality by the World Health Organization. And that has major consequences: one in seven children is at increased health risk to the respiratory tract, brain function and the immune system. Also, many miscarriages be the result of toxins that are inhaled.

This UNICEF report now delivers, is not accidental. The children's organization urges world leaders to take immediate action to halt the pollution. UNICEF contributes to this end a number of solutions: