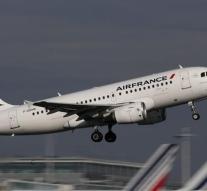 mombasa - A unit of the French airline Air France on Sunday made an emergency landing in Kenya because a suspicious object was found in the toilet. That the Kenyan police said.

The aircraft was en route from Mauritius to Paris and had fourteen 459 passengers and crew on board. It landed shortly after midnight Sunday in Mombasa, where the plane without problems could be cleared.

Bomexperts investigate the found object to determine whether it contains explosives, police said.