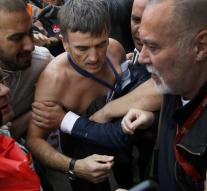 - Five members of the ground staff of Air France early Monday morning arrested in connection with attacks on two executives from the airline a week earlier. According to police, more arrests will follow probably Monday .

Among others, Air France boss Xavier Broseta was on October 5 for the headquarters assaulted by union members. This happened after a meeting where the company announced that it would cancel 2900 jobs for 2017. Air France sends Monday the first letters in which people who were involved in the violence, dismissal is told, reported the newspaper Le Figaro.